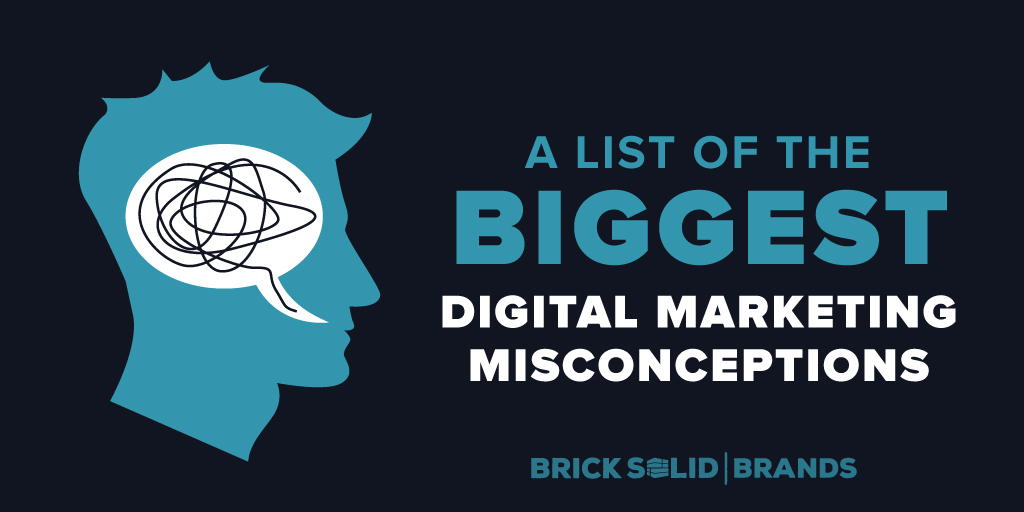 It’s rare to find two people who agree on everything when it comes to putting together a holistic digital marketing plan. Even the most experienced advertisers have their own, unique set of beliefs about what strategies drive real business results that grow a company’s bottom line.

While there are several different ways to execute an effective digital ad campaign, there are even more ways to inefficiently spend money that small businesses can’t afford to waste. In this article, I’ll explain how ad dollars get wasted when businesses put too much stock into these common marketing misconceptions.

Misconception #1: Web Traffic Is Everything

It feels good to run a campaign that drives thousands of clicks to your site or generates hundreds of likes and comments on your social media pages. With that being said, these numbers are often superficial and don’t translate into real sales or revenue results.

Too many advertisers, especially third-party agencies, think that getting as many clicks as possible is the key to success. It makes sense – a high CTR looks great on paper. Just make sure you realize that unless you’re able to turn those clicks into conversions, they aren’t worth as much as you might have thought.

Misconception #2: “I Just Don’t Have the Money In My Budget”

Without question, the reason digital marketing has become so popular is that it’s accessible to nearly everyone. Whereas you might be paying thousands of dollars for a short TV or radio spot, you can spend as much or as little as you can afford on digital marketing products.

Even a small budget of $150-200 per month can result in tens of thousands of impressions from your target audience. Even if you’re not able to perfectly calculate your ROI, with such low costs it’s a safe bet to say you’re going to benefit from the brand exposure.

When it comes to determining whether or not you have the money to use toward digital marketing, employ the same philosophy as you would when deciding if you have enough money for insurance: If you don’t think you can afford to have it, that’s an indication that you can’t afford not to have it.

Misconception #3: You Need to Switch Up Creative Frequently

Whether it’s on a monthly or even a weekly (gasp!) basis, some digital marketers think that keeping creative messaging “fresh” is the only way to go. While I won’t argue that “stale” is the better option, it’s important to recognize that there is such thing as swapping out creative too often.

I’m not coming at it from a human psychology standpoint, which would suggest that your message won’t “sink in” if your audience only views an ad once or twice. Rather, I’m suggesting that if you’re constantly altering your creative assets, machine-learning algorithms which are responsible for much of your success aren’t going to have the time to learn which type of user is most receptive to your ad.

Take Facebook, for example. Each time a new ad is launched, it spends time in the “Learning Phase” which indicates that the platform is still working out which users should be seeing the ad, and which aren’t going to be nearly as interested in your brand. A conversions ad can take up to 10 days to complete the learning phase, which means if you’re switching out creative on a monthly basis, you’re spending 1/3 of your budget on the learning phase. That’s not exactly budget-efficient.

There’s no one-size-fits-all answer to the question of how long you should keep creative running, but if you’re changing it just for the sake of changing it, it’s probably hurting your overall results.

Ethical considerations aside – and there are plenty of issues there – microtargeting isn’t the magic bullet that some marketers hope it could be.

If you’re unfamiliar with the concept, microtargeting is the practice of serving ads to a hyper-specific audience. Though it has primarily been used for political campaign purposes in the past, some businesses have implemented it as a marketing strategy for their products or services.

While I won’t say that microtargeting is useless all the time, it’s not going to be an effective strategy for the vast majority of businesses. It’s going to be much more cost-effective to err on the side of opening up targeting parameters so that more people are exposed to your brand. You never really know who’s going to be interested in what you’re selling.

5. Misconception #5: SEO Takes Too Much Time

Search engine optimization (SEO) is arguably the most important component to your overall digital marketing strategy. The reality is SEO is as much an art as it is a science, but one thing is certain – it can’t be ignored.

Whether it’s posting content regularly, optimizing your content for mobile viewing, or increasing the speed of your website, there are a number of actions that can be taken to help your customers find your business organically. Don’t forget about local listing platforms such as Google My Business, Yelp, and others as well – these can be the first touch-point for customers finding your business and play a large role in the search algorithm’s results for local traffic.

Digital marketing has now been around long enough that it’s worth reconsidering which strategies are going to lead the way in the future, and which are better left in the past. Businesses that aren’t willing to experiment with new philosophies risk falling behind the competition.

If your business needs a proven partner with experience growing brands of all sizes and industries, get in touch today to find solutions that get real results.