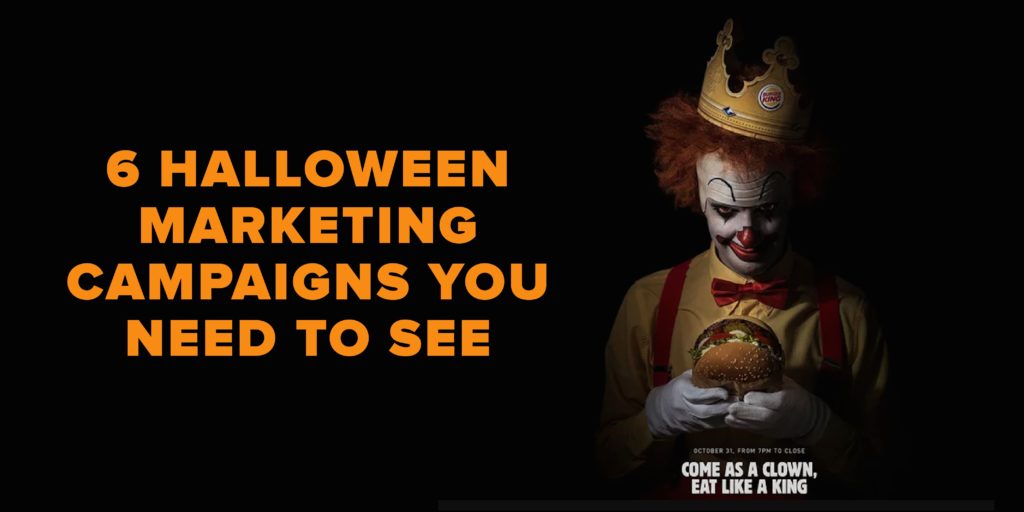 We’re officially in the heart of Spooky Season, and advertisers everywhere are looking to incorporate the holiday spirit into marketing material. From candy to condiments, brands in a range of industries prepare creative campaign ideas that help take advantage of the weeks leading up to the big day.

While it’s easy to throw some orange and black into your advertising material and call it a day, a truly successful campaign involves thinking outside the box (the coffin, if you will).  If your business is considering a Halloween campaign push of your own, these six examples should help you get inspired.

How long does a scary movie have to be in order to engage an audience? If you’ve watched the “Bite-Size Horror” series from Mars, you’d say it only takes two minutes.

Leading up to Halloween, the candy conglomerate promoted fan favorites like Skittles, Sunburst, Snicks, and M&M’s with their short-form movie series that is actually scarier than you’d probably expect for a movie with a two-minute runtime. The production value was that of a movie studio, and you can’t help but be drawn in for the 120 seconds of horror.

Check these films out for yourself…if you dare.

Back in 2016 Airbnb decided to give fans of the classic “Dracula” a chance to have the trip of a lifetime. The company put together a contest in which the winners were given a flight to Romania (the home of Dracula’s Transylvanian Castle), free meals, and then the opportunity to lay down in the velvet-lined coffins in the castle where Dracula himself once roamed. 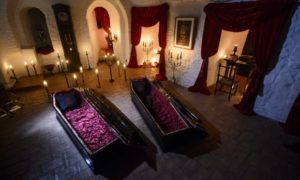 Airbnb received more than 88,000 entries for their Dracula giveaway. (source)

When asked about the experience, the two winners – a brother and sister pair from Canada – told castle manager Alex Priscu she was “overwhelmed. This may be the best day of our lives.” Hey, a night in a coffin in a legendary haunted castle? That’s hard to beat!

Few brands have a rivalry like the one that’s carried on between the two biggest names in fast food – Burger King and McDonalds – since each opened their doors in the mid-1950s. So naturally when Halloween rolled around in 2017, Burger King did not want to waste the opportunity to poke fun at their competitor while also getting into the spirit of the season.

Burger King announced that they would be giving out free Whoppers to anyone who visited their restaurants dressed like…you guessed it…a clown. It’s hard to deny that this round of the Burger King vs. McDonald’s fight went to BK. They used the holiday as a reminder that, unfortunately for Mickey D’s, clowns are inherently creepy and there’s nothing anyone can do about it.

4. Lunar Beauty Cosmetics Looks to the Past

Millions of people look to their makeup cabinet to put the finishing touches on their Halloween costumes, and Lunar Beauty played on this theme for their 2019 promotion. Their “Moon Spell” collection was about to launch and the inspiration behind the line came from some of the iconic witches that were featured in 1990s Halloween classics.

From Hocus Pocus to Kiki’s Delivery Service and many more, the cosmetic brand showed its customers how they, too, can be like some of their favorite Halloween movie characters from their childhood. When you combine nostalgia with a seasonal touch, you have a strong one-two marketing punch that made their product launch a massive success.

Halloween is all about the fear, and Skittles made opening a pack of their “Zombie” edition treats a truly nerve-racking experience.

The special edition packs were filled with several delicious Halloween-themed flavors such as Mummified Melon and Boogeyman Blackberry, but that isn’t why customers wanted to try them. They were looking for the Zombie Skittle! 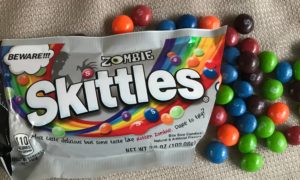 The thrill of potentially popping the rotten flavor? We’re in. (source)

Instead of playing it safe, Skittles decided to add a trick to their treat…a disgusting flavor that can only be described as “rotten.” This was, of course, the Zombie piece. It turns out that it truly was a disgusting piece, as the company itself described it as, “an utterly disgusting taste experience that will elicit strong reactions from anyone and everyone daring enough to try it.”

The key to this campaign was piquing the interest of consumers enough to spend a buck or two to see what the hype was all about. Trying the “zombie” Skittle was an act performed by many online influencers, which meant the promotion blew up among teens across the nation.

6. Crest Fights Back Against Candy Culture

There’s no denying that excess candy consumption can lead to cavities in kids (and adults too, for that matter). Crest, one of the foremost authorities in all things oral care, decided to develop a marketing campaign that helped parents deal with the availability of candy during the month leading up to, and weeks following, the big day.

Crest held a competition where the prize was a limited edition Candy Safe. That’s right – the grand prize was a Halloween-themed lockbox that made sure no prying hands could get to the treats without parental consent.  In order to enter the contest, Instagram users posted why their family uses Crest products and why a Candy Safe would be beneficial to have in their home.

This campaign is a great example of how to get real-life customers to become living, breathing advertisements while promising something in return (a chance to win the prize). User-generated content has long been considered the gold standard in digital marketing material, and Crest took full advantage of customers’ enthusiasm.

You might not have the luxury of a multi-million dollar marketing budget like these major brands, but that’s no excuse for letting this season go to waste. Audiences of all ages and interests view Halloween favorably, and putting a little extra effort in during this time might help you convert a customer who will keep coming back for more.

If your brand need a partner to help develop a creative strategy that works for your business and budget, get in touch today to find solutions.