4 Takeaways from ‘The Social Dilemma’ 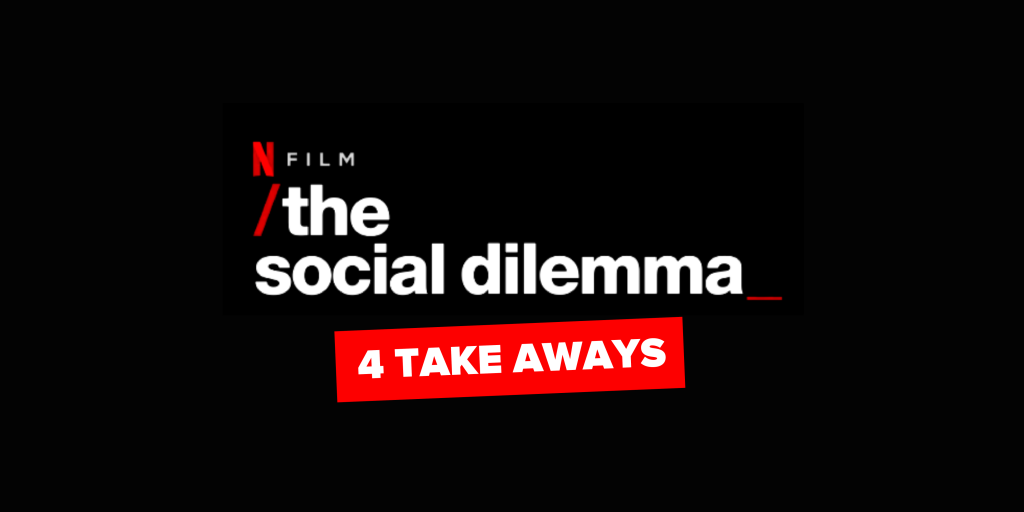 Netflix’s documentary “The Social Dilemma” is an attempt to get everything out in the open. Perhaps if we know what’s happening, we can avoid falling victim to the negative impact artificial intelligence and social media algorithms can have on our mental health.

Undoubtedly entertaining, the film wades into an area of technology that internet giants like Facebook and Google would probably rather stay away from…if they were being honest.

In this article, I’ll lay out four key points that explain why we don’t need to live in fear of social media or the internet.

The endless library of user-information and its collection methods seems to fall into an ethical gray area – but is it really as bad as it seems? It’s a complex question, but my answer would be: Not if you know it’s happening.

The documentary points out that records of your browsing habits are the key ingredient to making social media companies the multi-billion dollar operations they are today. Every action you take on their platforms is tracked, and sold, to a company that will then use that information for advertising purposes. Invasion of privacy, or fair game?

The bottom line is that although they’re ubiquitous throughout the world, social media sites aren’t built to be a commodity like electricity or water. By that I mean you don’t need them to live. If you’re uncomfortable with how these companies are using your data, it isn’t difficult to log off or delete your accounts and move on.

Social media companies could be better about disclosing this side of the business, and hopefully “The Social Dilemma” has opened a few eyes. Now that the information is out there, users can evaluate the situation and make a decision about whether or not they’re comfortable using these sites. In the end, it’s likely that the vast majority will accept the circumstances.

The documentary spends a good deal of time discussing how social media newsfeeds often become an echo chamber. The algorithms running these platforms know what information you like to consume, and fills your timeline with more of the same. Unsurprisingly, this can lead to a single-minded approach due to the fact that you’re only getting one side of the story.

Do social media companies have an obligation to show you different perspectives? That’s up for debate. What isn’t up for debate is the personal responsibility social media users have to seek out information from a wide range of sources. Simply put, if you’re getting all your news from your Facebook feed and never look elsewhere, that’s on you.

There’s no doubt that social media sites are a contributing factor to political polarization, but blaming Facebook for fostering fringe political views feels like blaming the substance and not the addict. Everyone has the power to access an endless sea of information from every side and perspective imaginable. It’s time we, as internet users, start taking some accountability.

If data collection is only being used for advertising purposes, we’re going to be okay.

Platforms like Facebook and Instagram generate tens of billions of dollars in revenue from companies advertising on their sites – asking them to change their business model for the sake of our privacy is naïve at best.

Yes, the accuracy of the ads we see on our screens can feel invasive. At the same time, getting served ads for things you might be interested in is better than being flooded with irrelevant ads for things you’d never consider purchasing.

Again, the theme is that you must recognize the exchange that happens when you use your social media accounts. That is, you can use them for free, but you have to accept the way your participation is going to be used as part of a for-profit business.

It’s hard to believe that the internet has been available to the general public for only 30 years. No invention has ever transformed the course of human history in such a short period of time. To think that we would be able to get through this experiment without our fair share of growing pains is simply unrealistic.

When cars were first invented, they were extremely dangerous. Over time, they’ve become exponentially safer. Cigarettes used to be branded as healthy, now smoking is at an all-time low. The point is, getting it right takes time.

In the context of human history – and even just American history – the internet is a baby. When you look at social media, it’s clear that we’re learning as we go. I’m not making excuses for tech and data companies who abuse the capabilities of their creations, but rather as an example that there is some historical precedent for potentially-harmful things becoming safer over time.

Over the last few years, we’ve seen an increased push for privacy and responsible data management. Social media companies are becoming more transparent in disclosing how they use your information and this allows people to make informed decisions. They might still be tracking your every move, but in today’s digital age it’s becoming more difficult to claim ignorance.

If you haven’t seen ‘The Social Dilemma’ yet, it’s certainly worth the watch. The issues discussed in the film are only going to become more relevant as we continue to spend more and more of our time, both professionally and personally, online.

Though the film has a dystopian feel at times, there are plenty of reasons to be hopeful about the future of the internet, AI, and big data. Most notably, we’re talking about it.