What to Do If Your Digital Ad Campaign Isn’t Performing 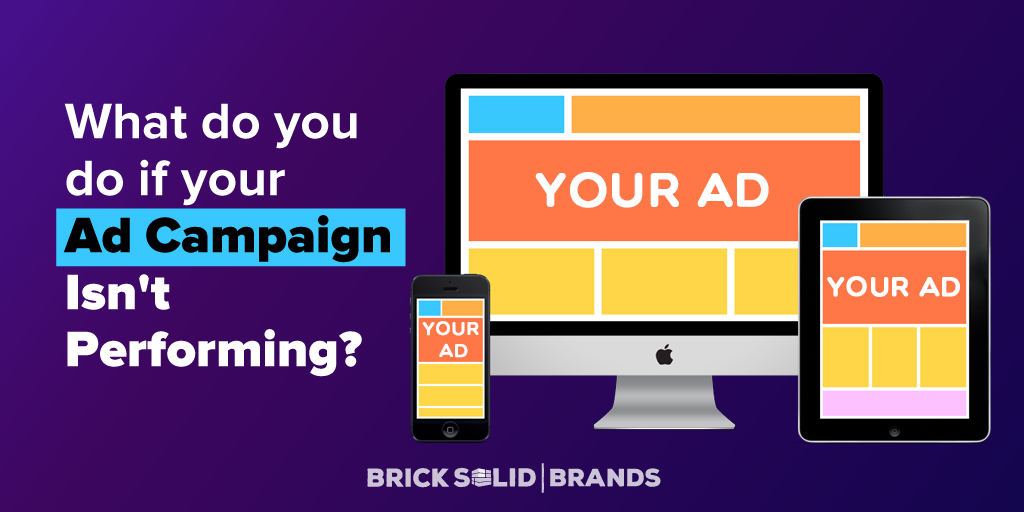 What to Do if Your Digital Ad Campaign Isn’t Performing

Every digital marketer has been there before. Sometimes a campaign that was thoughtfully put together and executed according to plan simply does not get results.

While the occurrence of such a situation is largely inevitable, when it does occur, it’s important to make adjustments. Sometimes small tweaks can be the answer. In other instances, it might be time to go back to the drawing board.

In this post, I’ll lay out 4 steps to take if your campaign isn’t performing.

Inexperienced marketers, and even some who have been in the industry for a while, might look at an underperforming campaign and immediately start making edits. Unfortunately, if you haven’t given a campaign enough time to run, you might end up making things worse.

Nearly all web platforms operate with an algorithmic delivery system. Whether it’s Facebook, Google, or any other major provider, there’s a machine-learning process that helps find the right audience for your advertisement.

If you don’t see great results when you first launch a new campaign, the best advice could be to let the algorithm work uninterrupted. It’s not uncommon for some platforms to take several weeks to start delivering to the users who are most likely to be interested in your product or service.

The caveat to this is that sometimes an ad won’t get better no matter how long it runs. However, the only way to know for sure is to give it some time. As a general rule, wait at least two weeks before seriously considering any changes to a campaign you’ve recently launched. If you make changes too quickly, you’ll restart the machine-learning process all over again.

If your audience isn’t engaging with your ad, the first thing to take a deeper look at is your creative.

Even if you have the most detailed targeting options applied, if your ad isn’t catching the attention of the audience you aren’t going to see results. But how exactly you determine what qualifies as good creative? The answer isn’t always clear.

Each advertising platform has its own specific criteria for “creative best practices.” It’s important to stay up-to-date to make sure you’re following their guidelines, meaning the guidelines that the machine-learning algorithm will find most favorable.

Generally speaking, ads that have less text and more attention-grabbing graphics tend to perform better. With that being said, sometimes a certain combination of copy and imagery can land with your audience for no obvious reason. Luckily, there’s a workable solution to help make it less of a crapshoot.

Split-testing, or A/B testing, delivers two different sets of creative to the same type of audience. From there, the audience can help you make the decision on which ad should be used, and which can be scrapped. Even if you still don’t see why one ad outperforms another, at least you’ll have reliable data to use moving forward.

With targeting options becoming more detailed on a regular basis, it can be hard to resist using all the tools at your disposal. As advertisers, we want to reach the exact audience who is going to purchase our product or service. The only problem is sometimes we aren’t always sure who those people are going to be.

When a campaign isn’t performing well, it can be tempting to try to narrow your audience down even further. It might seem counterintuitive, but the opposite is usually your best course of action.

Nobody likes wasting money by paying for your ad to be shown to an uninterested group, but it’s best to operate under the assumption that your targeting isn’t going to be perfect. For any business, there are customers who fall outside the range of what you would consider the “typical” audience for the product or service.

If your ad isn’t getting the results you were looking for, try opening up your targeting just a little bit. It’s better to show your ad to a few people who aren’t going to use your company than to neglect a segment of the population who may be interested.

The landing page experience is arguably the most important component for getting the highest return on your advertising investment.

Getting people to engage with your ad is great. Driving traffic to your website is crucial. But it’s how your audience reacts to your landing page that will determine whether or not an ad campaign was a success, or a case study on what not to do.

Some characteristics of a quality landing page include:

The users’ landing page experience plays a major role in how ad platforms like Google and Facebook view the “quality” of your advertisement, which has a big impact on overall performance. Don’t let your well-designed ad go to waste by leading your audience to a sub-par landing page.

Don’t get discouraged if you notice a campaign isn’t performing up to the standards you expected. Odds are that you can significantly improve your results by making a few adjustments in key areas.

As ad platforms evolve, the recommended “best-practices” might change as well. Check back to our blog for the most up-to-date information. If your business needs assistance in strategizing or executing a campaign, get in touch today.